What a lovely evening as we welcomed members of the local Otterbourne community, former chorus members and friends and family.

Singing with joy and energy to a ‘full-house’  our uplifting repertoire included songs from Queen, Paloma Faith, Lady Gaga,  ELO and Chaka Khan.

One of the highlights of the evening was the world premiere performance of an arrangement by our Musical Director (Oliver (‘Ollie’ Downer)  of ‘I’m every Woman’, with our audience members clapping along with us.

We were delighted to be joined in the audience by the Chair of LABBS (Natalie) and regional representative (Deborah) who were both attending their first LABBS chorus concert of the year.

Our first public performance of the year! It felt so good to be singing live and not via Zoom.

It was great to sing some foot-tapping songs with a number of our audience joining in!

This weekend we should have been competing in our National Convention in Bournemouth.

However, because of Covid, this was not possible. Undeterred, LABBS put together an amazing weekend of barbershop and warmth from around the world.

A packed weekend, shared via live streaming video, zoom and video on demand included chorus and quartet performances, workshops, group singing, greetings from barbershop friends around the world and our even a ‘Fringe’ event.

Many thanks to the LABBS organisers who’d put so much effort to creating an uplifting programme for us all.

As part of the programme, each quartet and chorus was invited to submit a 5 minute video to share their experiences over the last 6 months.

A huge variety of music and messages of hope and warmth were shared.

We are so pleased to finally share our video for Convention 2020.  Shot when we had some sunshine around beautiful Winchester we joined together to create a video we are so so proud of.
Thank you to Lewis and Ollie who tirelessly worked on our video- you captured our chorus’ life and spirit.

We were delighted and proud that our MD, Ollie Downer, was awarded the Katy Phillips Young Barbershopper of the Year at Convention.

Katy Phillips was a young woman with a love of all aspects of barbershop life who contributed and achieved a lot in her too short time with us. Katy passed away aged 28 years old in April 2015. To honour Katy’s memory and recognise this contribution, LABBS established the “Katy Phillips Young Barbershopper of the Year” Award and bursaries in her name.

Ollie is a truly worthy recipient of this prestigious award.

Another award, as Kathy Moore, one of the founders of the chorus was recognised by LABBS with a 25 year long-service award.

What a fantastic weekend we had together at the LABBs Convention in Llandudno. Such fun and laughter and a great performance!

What a fun day we all had at the Beggar’s Fair in Romsey!

With a full and appreciative audience in the United Reformed Church, we made the most of the lovely acoustics with a varied selection of songs from our repertoire including traditional barbershop numbers and songs from the 60s, the musicals and Queen.

This was also the first opportunity to wear our brand new T shirts – don’t they look great!

After performing, two of our members were “stopped in Waitrose’ car park by a couple who recognised us – or rather our tee shirts and said we were the best act of the day. They said it was obvious we put in hours of practice to achieve such precision! We glowed!”

The Beggar’s Fair is such a great family day out – with something for everyone! 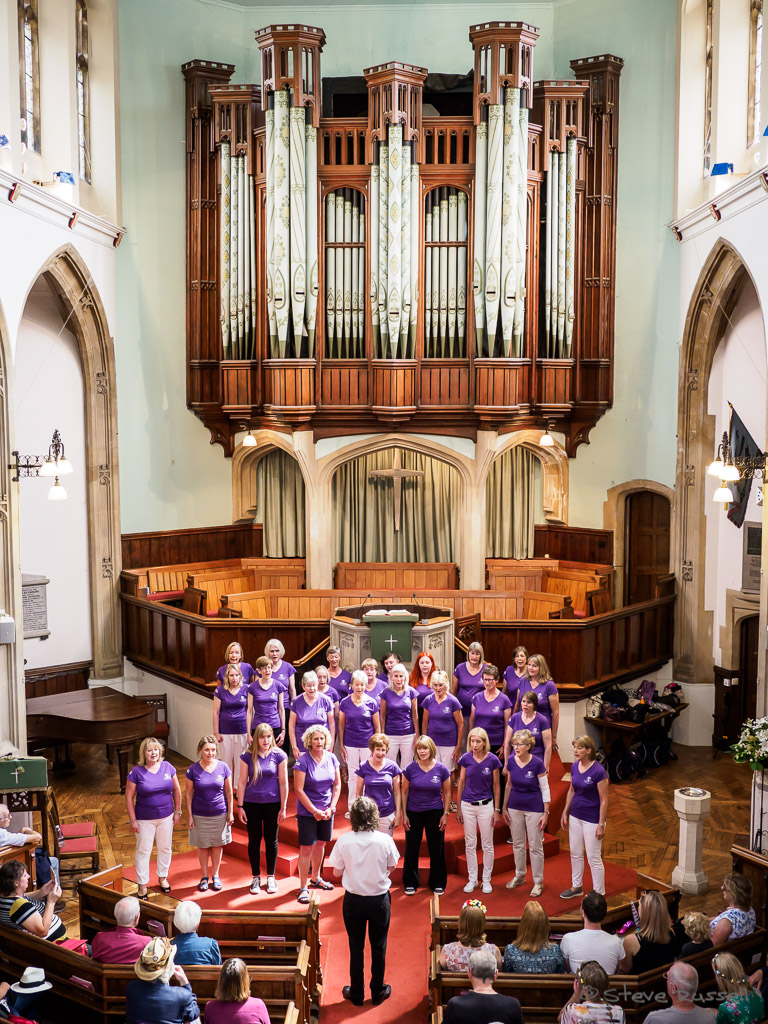 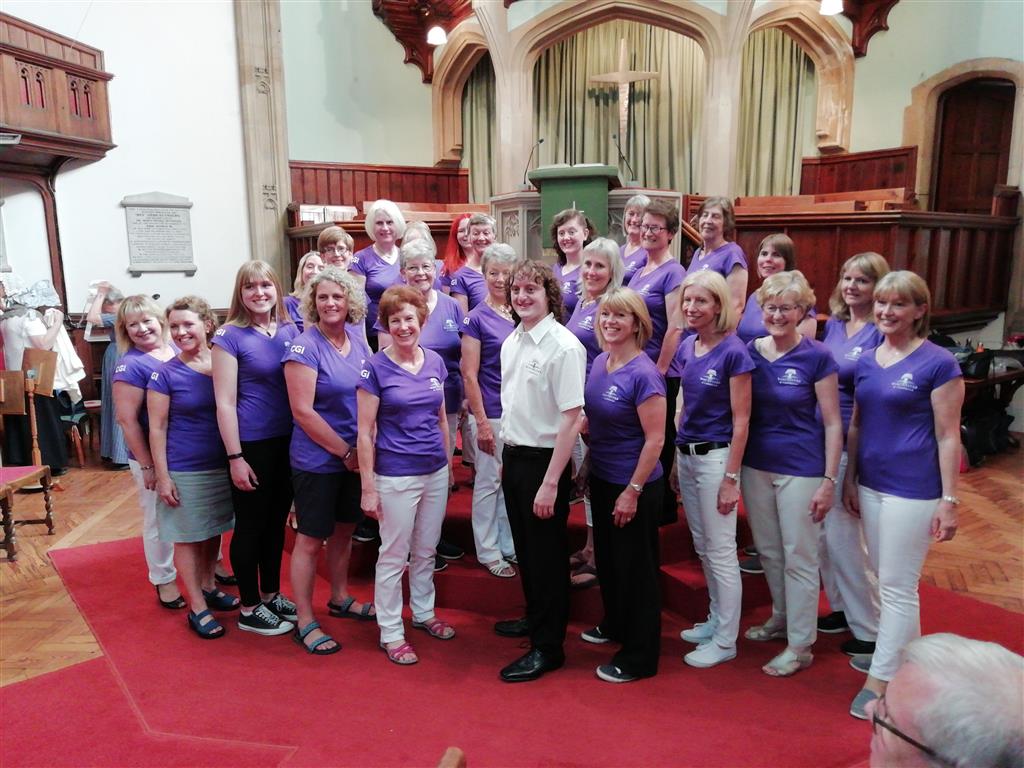 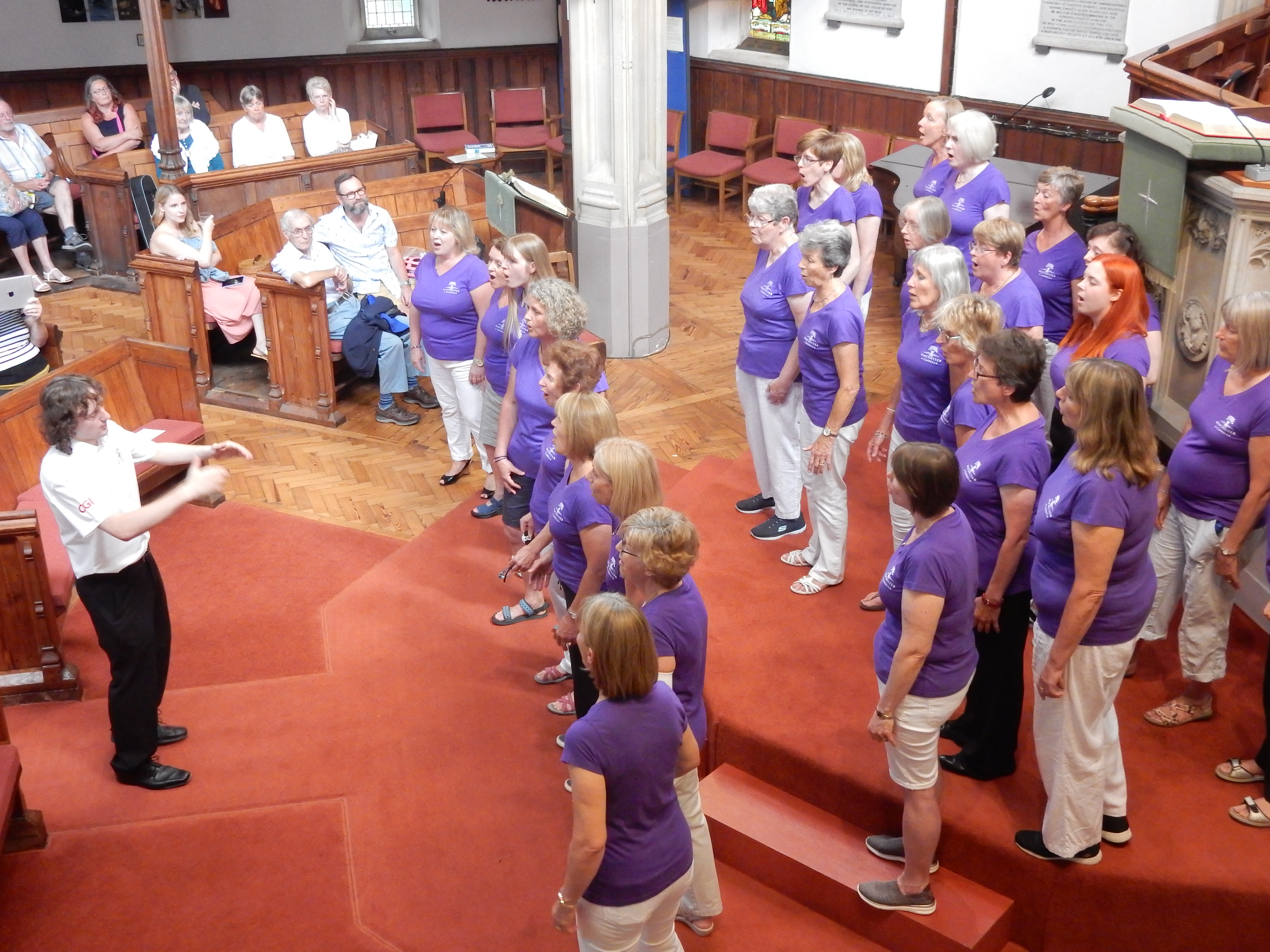 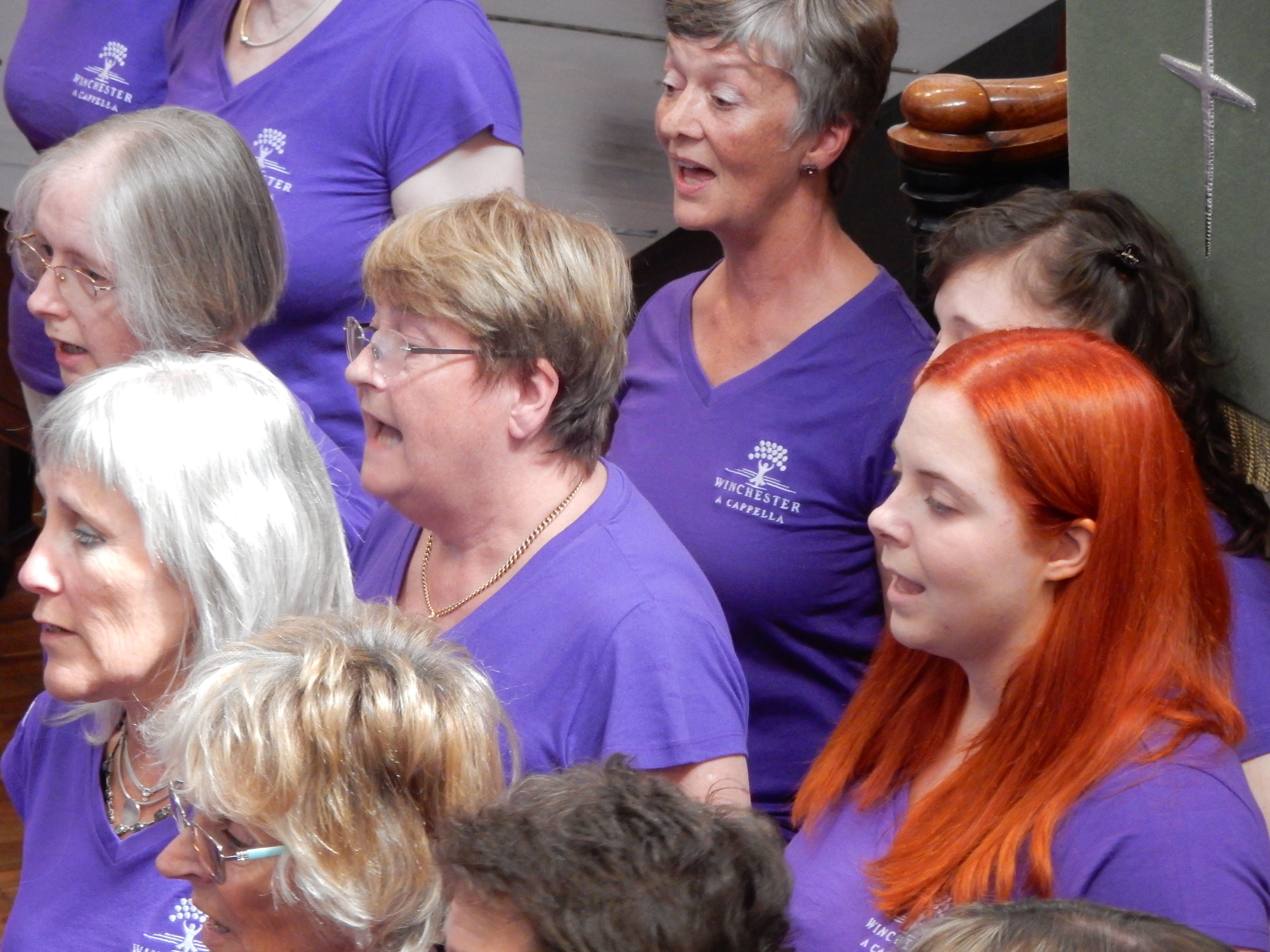 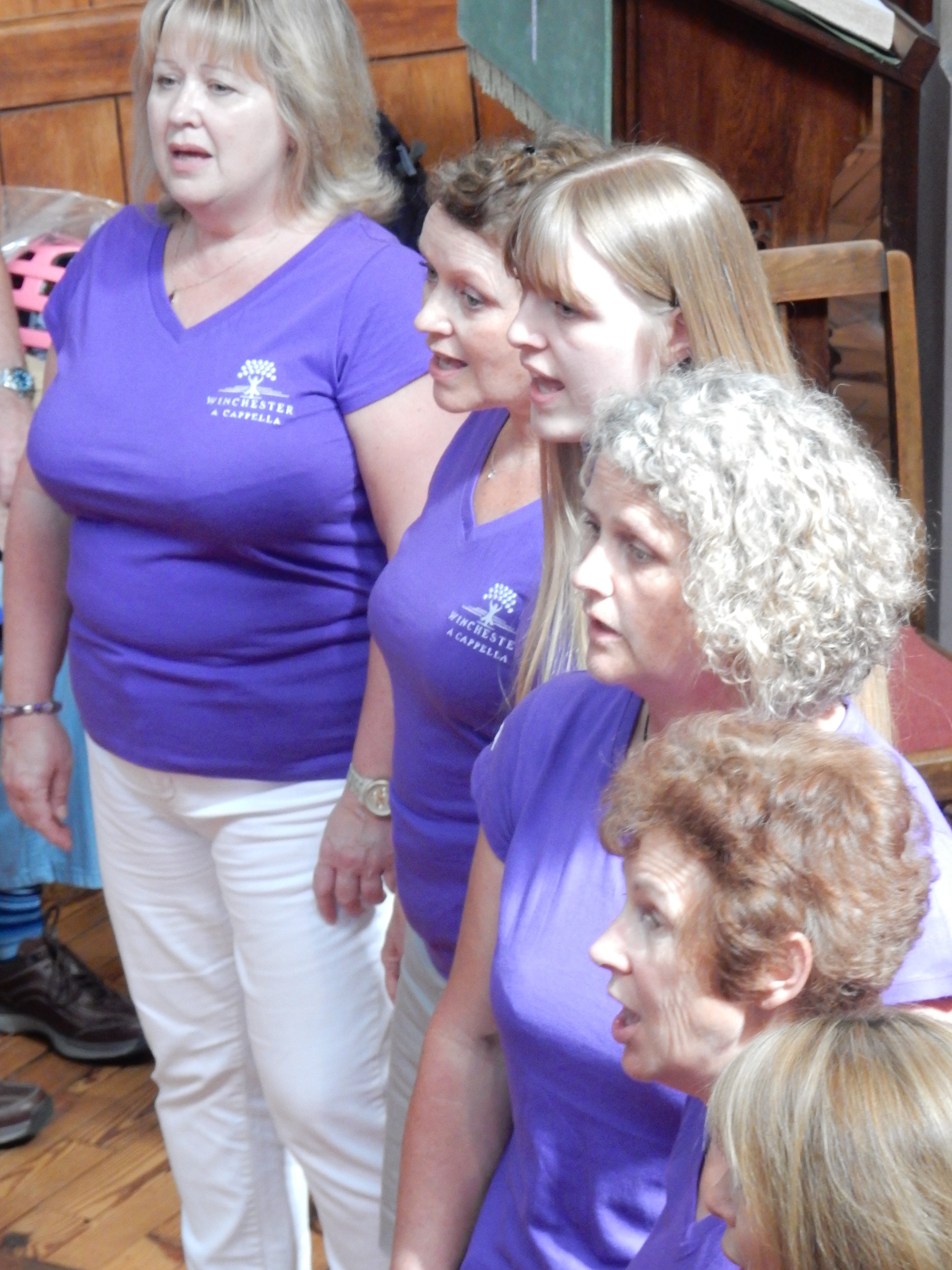 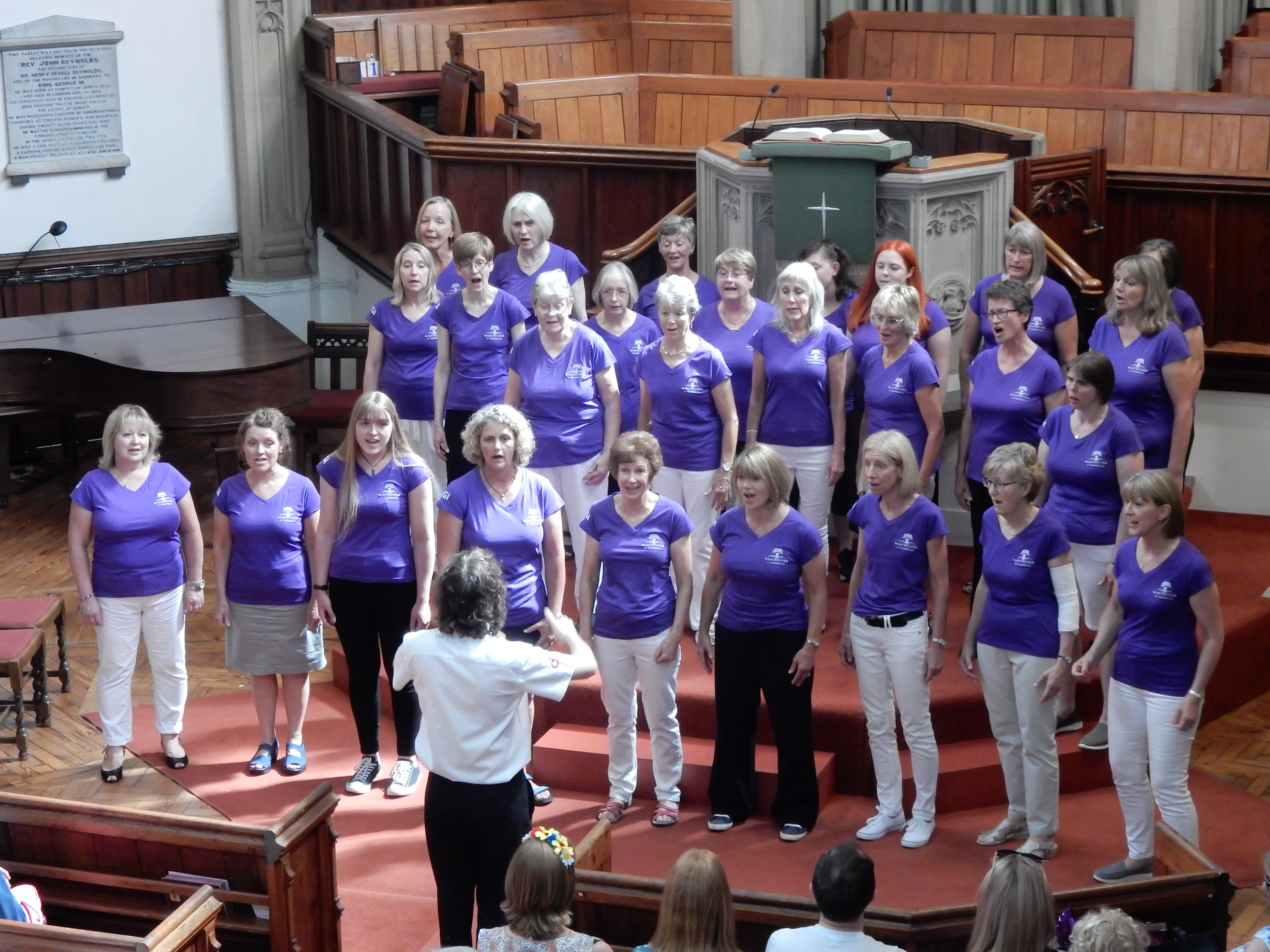 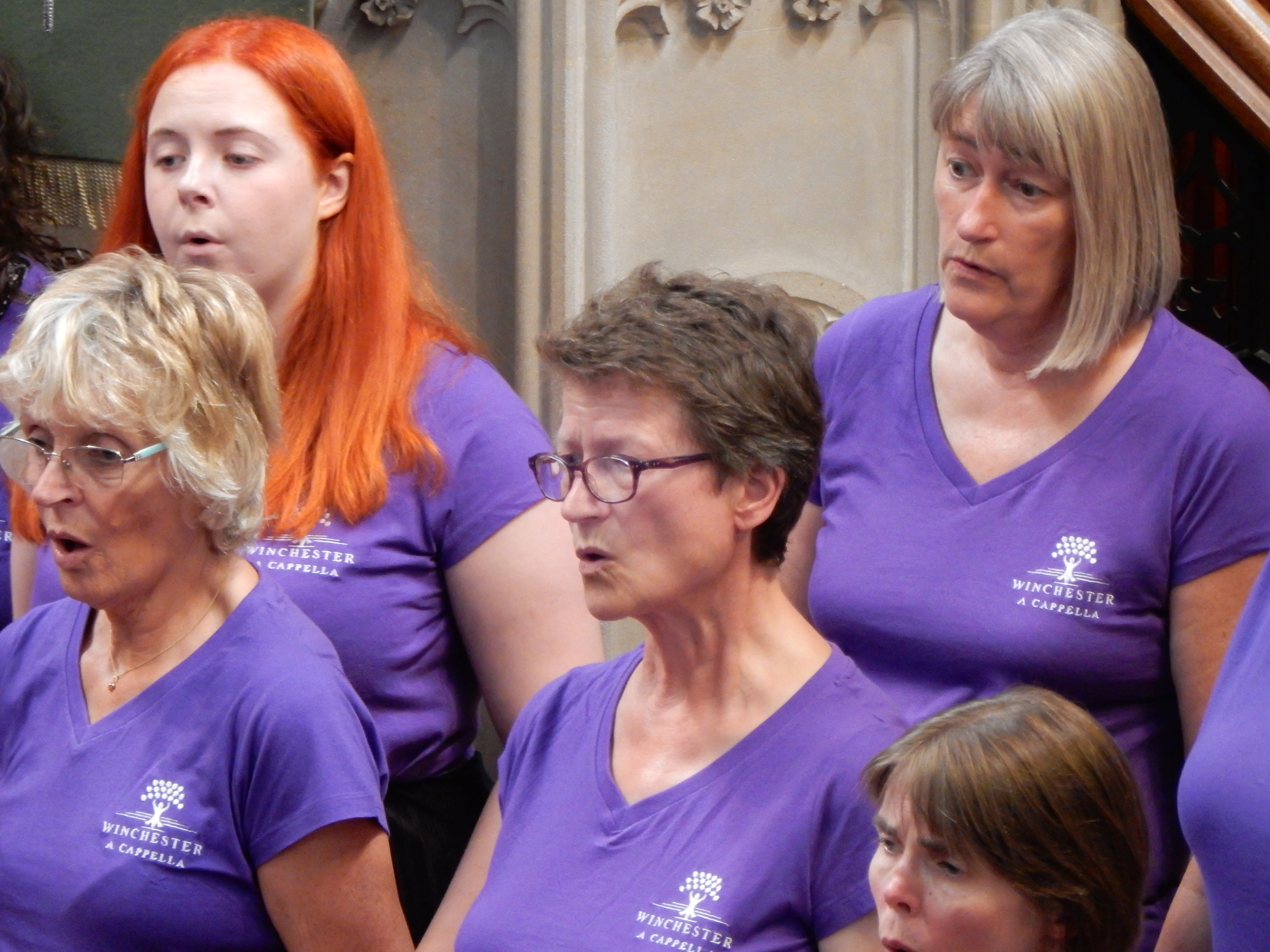 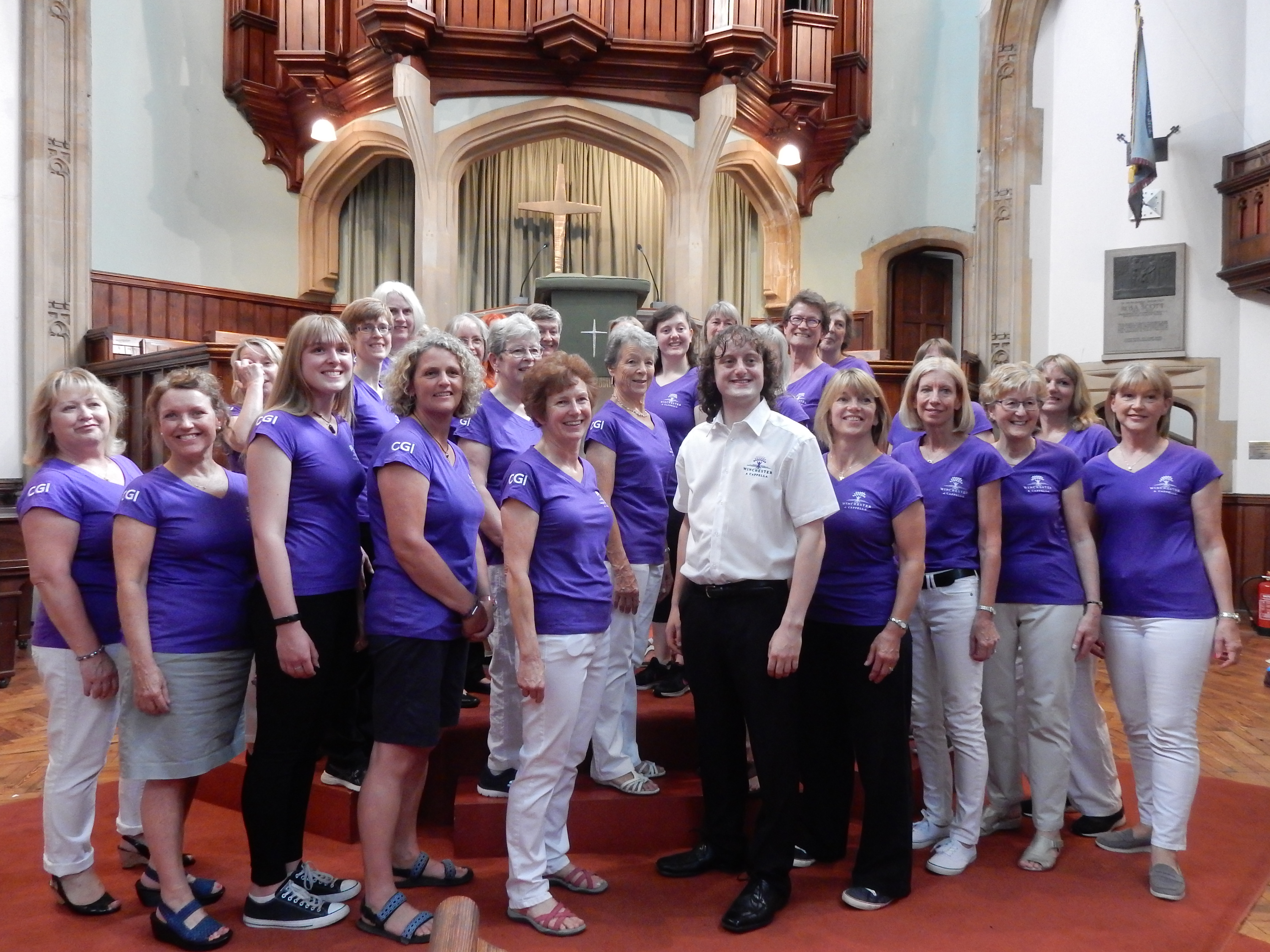 Having entered 3 classes, we were awarded 2 ‘Distinctions’ (87-89%) for our performances in the Choral part singing and Single-voice choir  classes and ‘Commended’ (84-86%) in the Barbershop class.

Feedback from the Adjudicator included: ‘You create a lovely wall of sound’, ‘Lovely controlled singing’.

This was our first concert of 2019, where Winchester A Cappella (in red) joined together in harmony with two other dynamic hampshire-based choirs -Rising Stars Community Choir and Bank Notes for a celebration of harmony.

Held in the wonderful Turner Sims concert hall, each chorus show-cased their own style of music with great enthusiasm providing the audience with a wide variety of entertainment.

Supported by a 3 piece band, the 3 groups performed together in harmony at the start and end of the concert celebrating their joy of singing.

Winchester A Cappella were delighted when they received a standing ovation form the audience after their performance.

The launch of ‘Winchester A Cappella’ was celebrated in style with cake and Fizz. 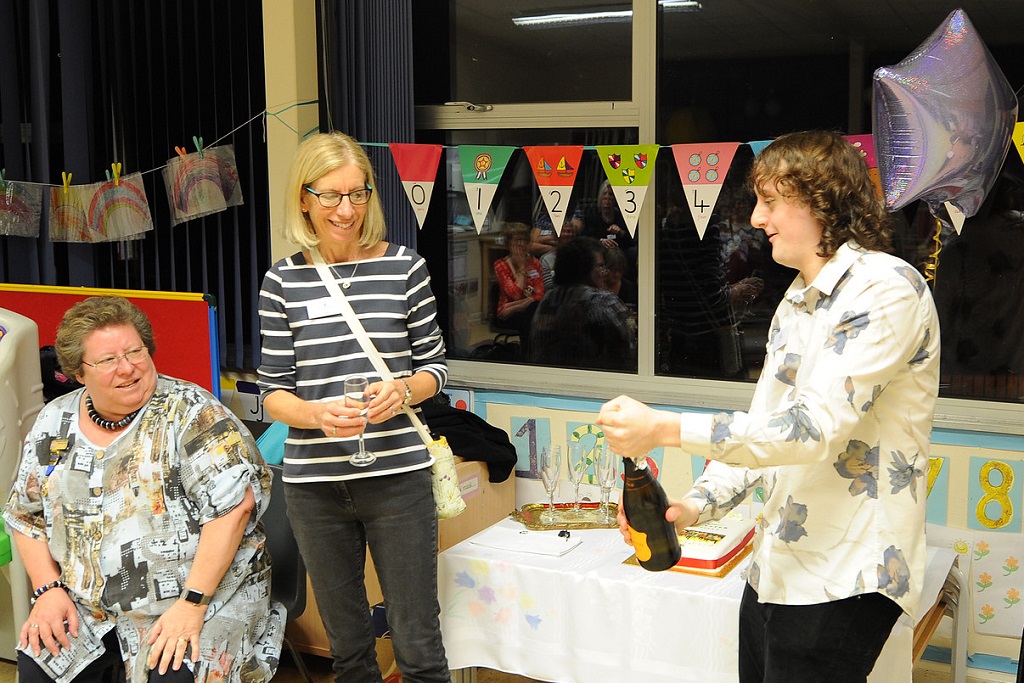 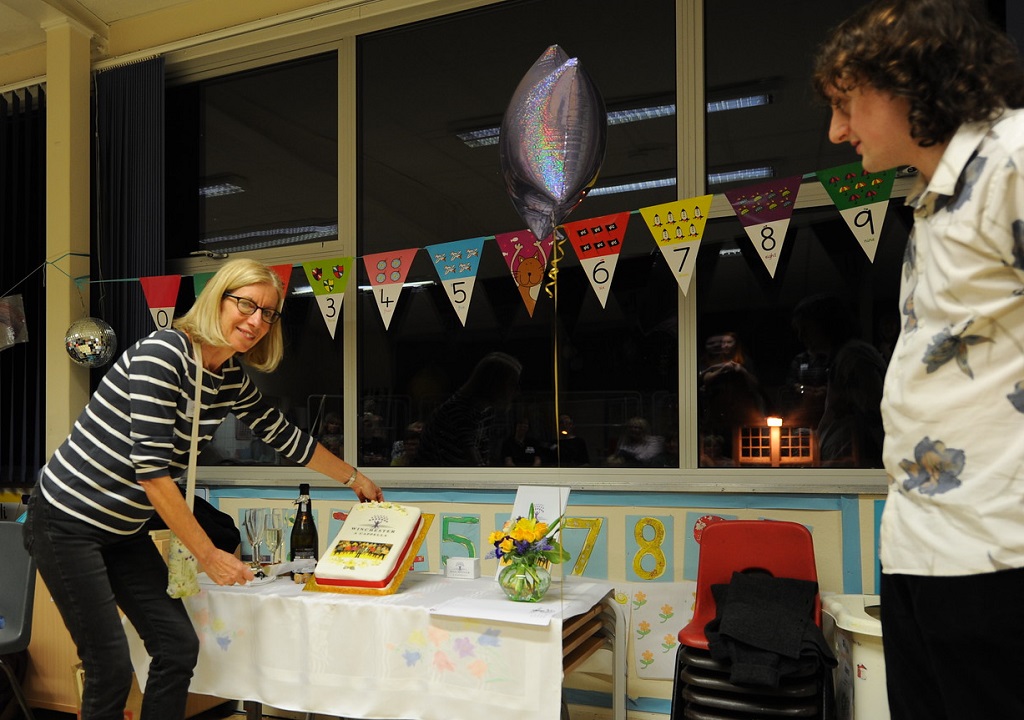 6th October 2017 Competed in the Irish Convention in Cork.

Joined by for past members and friends from other LABBS choruses, Di and her family took centre stage as we all enjoyed a fun-filled evening of smiles, song and laughter with entertainment including a mass sing of our favourite songs… and to top it all, an amazing celebration cake.

This year was the last convention with our MD, Di. We performed with enthusiasm ‘Taking a chance on love’ and the beautiful ballad ‘You don’t know me’.

The ballad was an all-time favourite of Di’s which she had selected specially for us to sing in this important year.

A great time was had by all. The chorus gained their highest marks to date at a LABBS Convention and Di was awarded a LABBS 40 year award. As usual, the singing and laughter went on late into the evening.